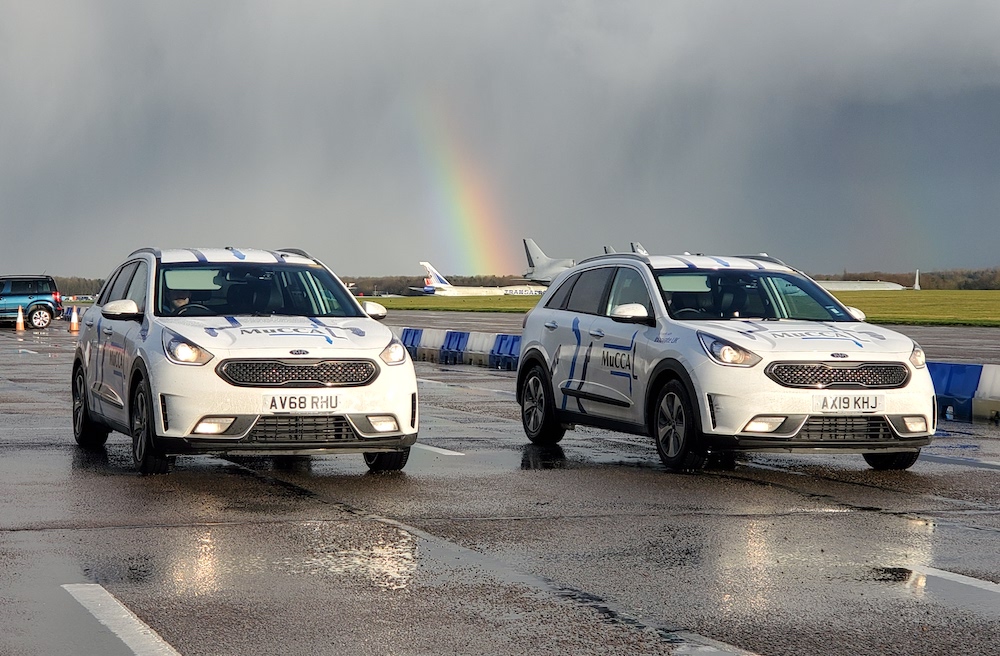 Dr Charlie Wartnaby says there’s an industry consensus that Level3 self-driving is not reasonable if it requires quick driver intervention.

Way back in 2019 we covered IDIADA’s role in the construction of the new CAVWAY testing facility, and that investment continued with a large new venture. With a PhD in physical chemistry from the University of Cambridge, Charlie Wartnaby was technical lead for the ground-breaking Multi-Car Collision Avoidance (MuCCA) project.

CW: “Certainly the funding from the Centre for Connected and Autonomous Vehicles (CCAV) for MuCCA and CAVWAY were big wins for us. Traditionally, we’d focused on automotive electrics and engine management, but we could see there was all this exciting CAV work. Now we’re working with an OEM I can’t name to run an field operational test using our IDAPT development tool – a high performance computer with GPS and car-to-car communications – as a spin-off from MuCCA.

“With the MuCCA project, we think we achieved a world first by having multiple full-sized vehicles do real-time cooperative collision avoidance. We still have the cars for further R&D when time, budget and Covid allow.

“In the UK, we’re focussed on building a new proving ground (CAVWAY) near Oxford, which should open in 2021. There’s also our CAVRide Level4 taxi project, at our headquarters near Barcelona. CAVRide shares some of the technology developed for MuCCA and they’ve done some really interesting vehicle-in-the-loop testing, having the real vehicle avoid virtual actors in a simulation environment.

“In the short term, we’re really working hard on the C in CAV. Connected vehicles offer massive safety and efficiency improvements, for example, by warning about stopped vehicles or advising on speed to get through traffic lights on green. There’s a bit of a VHS versus Betamax situation, with both WiFi-based short-range communications and the C-V2X 5G-based protocol, so we’ve upgraded IDAPT to support both.

“Personally I think that while heroic work by the big players shows robotaxi applications are feasible, economic viability is a long way off, 2030 maybe. Watch the latest Zoox and Waymo videos from America, they’re mesmerising! No way is that kind of tech going to be installed in private cars any time soon because it’s eye-wateringly expensive. Think about the costs involved in making every taxi driverless – it’d be out of all proportion to replacing driver salaries, especially considering backup teleoperators and maintenance and charging personnel.

“These big self-driving companies aren’t operating in the UK yet, but we do have very successful smaller players with intellectual property to sell. The UK government has been supporting a good number of R&D projects, via the CCAV and UK Research and Innovation (UKRI), and the regulatory environment has been reasonably friendly so far.

“I feel the first practical applications are likely to be low-speed shuttle buses and small autonomous delivery droids, but trucking is a very important area. If lorry drivers were permitted to stop their tachographs while napping in the back of the cab once on the motorway – only clocking up hours for parts of long journeys – that would make a viable economic case for a Level4 operating design domain (ODD) of ‘just motorways’, which is harder to justify merely as a convenience feature in private cars.

“In terms of current tech, emergency lane keeping systems (ELK), to stop drifting, are a major breakthrough, requiring cameras, sensors and autonomous steering. I welcome the road safety, however, if drivers engage automation systems like ALKS (automated lane keeping) by habit, for sure their skills will be affected. Perhaps there’s a case for the system enforcing some periods of manual driving, just as airline pilots perform manual landings to stay in practice even in planes that can land themselves.

“Concerns about timely handover are well-founded and I think there’s an industry consensus now that Level3 is not reasonable if it requires quick driver intervention. We see up to 20 seconds before some unprepared drivers are properly in control when asked to resume unexpectedly. It really requires that the vehicle can get itself into (or remain in) a safe state by itself, or at least there needs to be a generous takeover period. The difference between L3 and L4 is that the latter must always be able to achieve that safe state.”