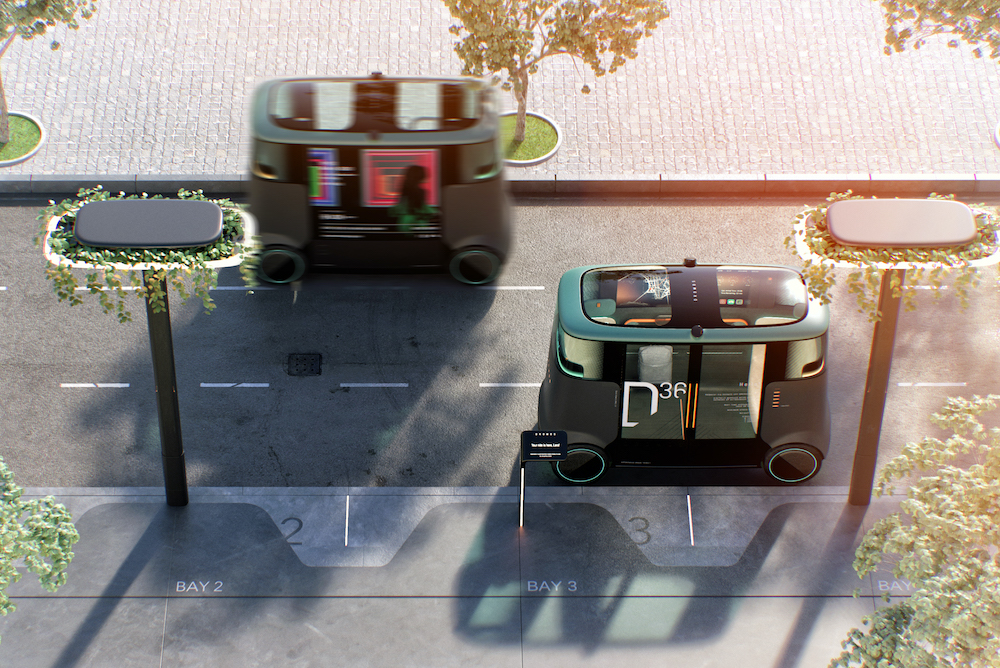 Famous for designing Virgin’s Pendolino train and the BT HomeHub, Paul Priestman is one of the UK’s 500 most influential people, according to The Sunday Times. Here, he describes three exciting connected and automated mobility concepts: 1) The Moving Platforms infrastructure network; 2) A modular electric car for autonomous network transit (ANT) company, Dromos; and 3) The Scooter for Life automated electric scooter.

PP: “I’ve always been interested in mass transit and its relationship with the city. Over 30 years, the company has grown and we’re now involved in all forms of transport, even space travel. We take ideas from one sector and transfer them to others.”

PP: “This was an idea that grabbed people’s attention: a tram that can move around a city, then go to the outskirts and join a high speed rail line, without stopping, and take you to another town or even country.

“First and last mile is the logjam. If you can crack that then people won’t need personal transport. The cost of private car ownership is astronomical – you have to park it, maintain it, it depreciates something rotten. But carsharing isn’t working yet because the cars themselves are not designed for it – they are designed to be personal.

“There’s an opportunity to rethink the whole system from purchase through leasing to shared ownership and public for hire models, alongside designing an interior which is appropriate for these variants of use. There are a number of disruptors in the market and just as we’ve seen other markets completely transformed through disruptors such as Uber or Amazon, so there’s an opportunity to look at the car industry in the same way.

“The car industry keeps forcing the same product on us, but the market wants change. For the majority of people, especially in cities, you can’t equate private car ownership with the open road, where you can do what you want, it’s just not realistic, but I understand that there are different needs for rural and urban dwellers.

“London is an example of a great public transport system, although most of our stations were designed 150 years ago and haven’t changed much. I use an app to see when the next bus is due and then walk up to the bus stop. The bus usually arrives on time and we fly down our own lane on the Euston Road, passing all the cars stuck in traffic.”

PP: “The system is important, not just the vehicle. It is elegant public transport designed around the passenger – the first autonomous system to deliver mass transit, and the infrastructure belongs to the city. The car we designed is half the width of a normal car, with space for two or three people, and it can be steam cleaned. It’s a personal vehicle which will come to you, wherever you are, and then join a dedicated track, becoming almost like a train, before peeling off to complete the journey.”

At this point, Priestman refers to our interview with the arch critic of driverless cars, Christian Wolmar. PP: “The problem with some self-driving concepts is you still get traffic jams full of cars with no one in them. A lot of that congestion is caused by delivery vehicles – every time you buy something online you’re causing a traffic jam. Once you have a vehicle which has a dedicated highway you’re free from other traffic and can travel faster and closer together.”

PP: “The Scooter for Life was a special commission for the New Old exhibition at the Design Museum. We gave it three wheels, so it doesn’t fall over, and a basket for your bag or dog. It’s electric and can also be automated, so there’s a take-me-home button. People immediately think of autonomous vehicles as being car-sized, but I think they might be smaller. The only reason cars were that size in the first place was to fit in the huge engine, which you no longer need.

“People taking the tube for only a stop or two really slow things down, whereas bikes, scooters and walking mean you see more of the city. It’s a bit reclaim the streets and reminds me of the Walklines we designed years ago. The Covid situation, terrible as it is, has shown us a less congested London –an increase in the use of bikes and walking, a city moving in a much healthier way. For me, that’s much more beautiful.”

For more on these designs, and a prototype Hyperloop passenger capsule, visit priestmangoode.com.